When I was a kid and lived in NYC I was a Yankees fan. (My father was a Giants fan). I went a few games, listened to games on the radio and argued incessantly with one of my friends who was a Red Sox fan as to who was better: Ted Williams or Joe DiMaggio.

At summer camp in Maine we occasionally listened to games on the radio. I became a Milwaukee Braves fan for a while. And then my interest in baseball died out - completely. While living and working in Cambridge I didn't even know that the Red Sox were in the 1967 or 1975 World Series.

And then in 1986 one day I said to Robert - hey, the Red Sox and the Mets are in the World Series - let's turn on the TV set and watch. Like many infectious diseases it only takes a little exposure and then the disease takes over you body or mind. Several years later we went to a few games and then in 1994 we got Season Tickets - weekday games only and we share them with a few other people. We go to about 15 games a year and watch most of the others on TV.

This year we went to 18 games - 15 regular ones and one of each Post Season series. The Red Sox record for games that we attend is 16 wins, 2 losses!

Last night we got to the first World Series game (in 2004 and 2007 we had chosen game 6 which didn't happen). I would say we had to stand up about 80 times. The rows in Fenway Park are narrow so when anyone enters or leaves the row you have to stand up and that happens a lot. And of course in lots of hot points in the game - 2 strikes, etc. everyone stands up. It was great fun - I'm a bit hoarse from yelling - it was cold but I dressed warm so that wasn't a problem.

Early in the game there was a muffed call by an Umpire - Pedroia was safe because of a dropped ball but called out by the nearest umpire. The umpires gathered and reversed their call; I've never see that happen.

In addition to being another very fine building, St Denis has another very important role. In several sections of the church there were tombs of the 9 centuries of buried kings. Lots of supine statues. I like the little lions used as foot rests. And no, I don't have a foot fetish but I like to collect feet pictures to make dance camp name buttons where I usually use a feet theme since dancing is about feet. 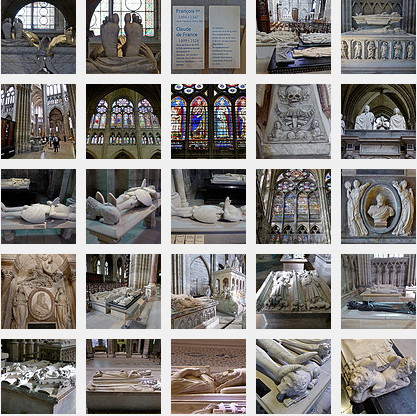