At the age of 94, Pete Seeger has died. This is the story of my connections to him.

When I was in ~4rd grade, a relatively unknown folk singer came to sing at an assembly at my school, (The Dalton School). He was most well-known to us because he was the brother of the geography teacher, John Seeger. John was my favorite teacher of all time.

I always admired and followed Pete's anti-war and civil rights actions and the manner in which he did them.

I went to a summer camp in Vermont, Camp Killooleet, which is still alive and well. My first year there was 1948 and the next year John and his wife Ellie became the owners/directors. After I outgrew this camp I went to another camp and became a counselor there. When that camp went out of business I retuned to be a councelor at Killooleet.

At this point, the folk music influence was strong at Killooleet principally because of Pete's influence. My co-councillor was Ed Badeaux, a good friend of Pete, and a serious banjo player. He made various recordings on Folkways Records. On the way home from camp that summer (1959) I bought a used 5-string banjo. Once when I took it in for some repairs the guy said that is a Benary, perhaps a Celebrated Benary which was made in the 1880's - 1890's. I still have the banjo - it isn't in very good shape and I can't really play it at all due to its condition and the lack of calluses on my fingers - plus some other finger problems. 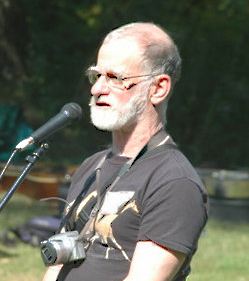 I visited Ed once after camp when he was house sitting at Pete and Toshi's house in Beacon, NY (near where my parents' summer home was).

I last visited Killooleet in 2010 for a memorial service for John. The camp is now run by John's daughter, Kate Seeger and her husband, Dean Spencer. I posted this and this after that weekend. It was a wonderful weekend. I saw people I hadn't seen for 50 years. And I got to do some nostalgic camp activities such as riflers and archery. Ag the memorial service I as well as many others got to speak about John. As a special highlight for me, Pete was there and I got to chat with him for a while.