This weekend was the annual New England Folk Festival (NEFFA). It takes place on the campus of a Middle and High School in Mansfield, MA. The two gyms are gigantic dance halls, various classrooms are used for other activities, Morris and sword dancing outside, and the cafeteria has a number of groups cooking and serving food (ours is one of those groups).

I don't know what the total attendance is but is probably a few thousand. It's fun to see lots of people I know from dances and dance camps and got to dance (English Country Dancing and Contra Dancing) with lots of them and some people I've never seen before. It is essentially an all volunteer event; musicians, callers, and others donate their time to have a wonderful weekend.

And if that isn't enough dancing - there is English on Tuesday and dance camp this coming weekend!

Our group (Lavender Country & Folk Dancers) runs a food booth. A few people are there all the time and there are about 30 volunteers who donate ~3-12 hours serving food, collecting money, and doing odd jobs. We serve pasta with meatballs (meat or veggie) with marinara or pesto sauce, meatball subs, hot dogs, salad, fruit cup, yogurt, scones, cookies, muffins, croissants (stuffed or plain) tea and coffee, iced tea or lemonade, frittatas and popovers for breakfast. The profits (we don't know how much yet - but it ranges between $4,500 and $7,000) go to the various dance groups to supplement their gate; volunteers get to designate which of several groups get their share. 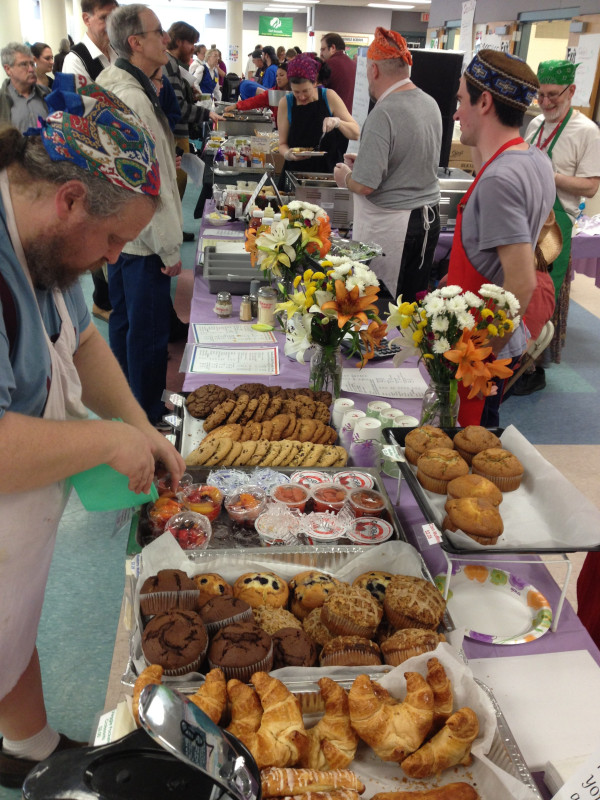 NEFFA food booth 2013 - looked about the same this year.

rsc is the volunteer coordinator which usually causes him a bit of panic about a week before when there aren't quite enough volunteers but it get resolved and people also just show up at the booth and help out so there were always plenty of people.

There are also a few people from the distant past that I get to see -- including one person who was a programmer on a Fortran Compiler project for which I was the project leader - about 50 years ago! Also some people who were in the Quadrivium, and early music performing group that I was in over thirty years ago.
Collapse