For various reasons lately I've thought about my career. So here is a quick summary post.

After graduating from MIT (Math) in 1960, I was a Physics PhD candidate at Columbia. That first year I also had a part-time job teaching 7th and 8th grade science. At the end of the year I decided I didn't want to be a mathematician, a physicist, or a teacher. You had to worry about the draft so I thought I try one more year at grad school while figuring out what to do. My father expressed one of his one-sentence brillant suggestions: "you should take a computer programming course". Another one was when I was wondering about where to apply to college he said: "You are going to MIT".

A few weeks into that course it became clear what I wanted to do. I moved back to Cambridge took a few classes at MIT as a Special Student while contemplating admission and had a part-time computer job. And in the spring I applied for jobs. You could get a draft deferment working for a critical industry which inluded computer companies.

My first interview was at Honeywell - to work on a Fortran Compiler project. I got a verbal offer at the interview and on the way home and stopped at a bank for a loan application so I could buy a new car. A few days later I got the written offer. I accepted it negotiated the start date and then went the dealer to purchase a brand new MG-A.

I wrote the code generator for that compiler and then became project leader for another compiler project. When that was done I joined the Systems Planning department - which was frustrating because they weren't very receptive to new ideas. They sent me and a colleague to an MIT symposium about Multics - a new operating system project that was a joint MIT, Bell Labs, and GE (the hardware vendor) project.

Several months later in early 1967 I (and my colleague) were new employees at GE. The GE office was in Tech Square - a remote office to the division in Phoenix. It was called the Cambridge Information Systems Laboratory (CISL).

I worked at CISL as a programmer, then development manager and eventually CISL manager. Bell labs dropped out early in the process (the Multics people on the project became the people who invented Unix). GE sold its computer business to Honeywell and Multics became a serious product. -multiuser with emphasis on security. It ran on an expensive mainframe (5-10 million dollars, a huge machine room - and not as powerful as my phone). We had very prestigious customers: Ford, General Motors, the Pentagon, NSA , the US Geologic Survey, Several Canadian government agencies (we were strong on dual language support - a Candian requirement), and a bunch of French agencies and universities (Bull, the French computer company had been affiliated with GE and then Honeywell for years).

In 1985 it was decided to "cap" Multics and CISLwas shutdown in 1986. A bunch of my team moved to Honeywell offices in Billerica to work in a new project (with some of the other people there) which we called Opus using Multics technogy to be a new OS on one of the Honeywell small computers; I was the manager. The computer industry was changing and Bull bought controlling interest in the Honeywell computer business and Opus was cancelled. Some of my team stayed, there was a reorgination and layoff and I inherited a couple of other departments.

A new highup VP decided he wanted to form a high-level group called Corporate Software Technology to work on advancing a bunch of things so as to improve productivity and product quality. I was recruited by him and became Mission Manager of Software Renovation - this was looking at tools and technology to help enhance existing products. It was interesting, and frustrating - I worked with people in Billerica, Phoenix, Italy, and France - and scored a trip to Japan since NEC was a partner.

One of my colleagues in Corporate Software Technology was named the manager of an Applied Research group and I joined it. Our main project was working with a research group at University of Illinois and another one at Columbia to build a prototype software Inspection system called Scrutiny. We demoed it a various conferences, wrote a paper with several of my peers to present at the European Software Engineering Conference in 1993. We got a DARPA grant to do more work on this and there were thoughts about making it a product. But with many changes in the industry and upper Bull management decide to scrap our work. In 1994, another layoff came up and I volunteered.

I formed a one-man consulting company - JWG Software Systems. Bull was one of my clients and worked with my old group a bit. Then I branched into working on a number of patent infringement law suits (defense and offense). At my own choice this tapered off until I stopped doing it (it was a nice transition - worked 4 days a week, 3 days, 2, 1, and then 0).

The last Multics system was shutdown in 1992. There is still an active Multics cult; people who worked on Multics are called Multicians. We have a Multicians web site. It took a while, but some of us eventually got Bull to release the source code (and system tapes) and they are stored at MIT. Last year at the 50th Anniversary of MIT's Project MAC there was a Multics session and I chaired a panel session.

Several years ago a couple of people started writing an emulator of the hardware and the system now runs. There is lots of discussion on the email list and it is fun to hear from some old-time colleagues. Some more work is needed and there are various thoughts about a possible future.

Early one morning we took another jaunt into the jungle off a little river from the Ucayali (I think) to a tree house and set of suspension bridges. We went through the covered walkways, climbed the stairs, and traversed across the swinging bridges and had some great views of the jungle from higher up. Some of these are actually lodging where you can stay overnight, 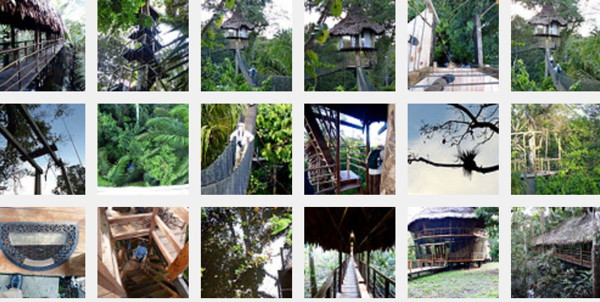