Near Melbourne along the southeast coast is an area called the Great Ocean Road; aptly called because the road is ~150 miles long. The water was relatively calm but there were some people surfing including a group of people that had just arrived. The tide was partly out and there were lovely textures in the rocks and sand. We stayed two nights at The Great Ocean Road Resort (over named but nice and convenient) in Anglesea and drove around to see stuff. This was the first time in a few years driving on the left side of the road. The hardest thing to remember was that the direction signal lever is on the other side of the steering wheel - I turned on the wipers many times. 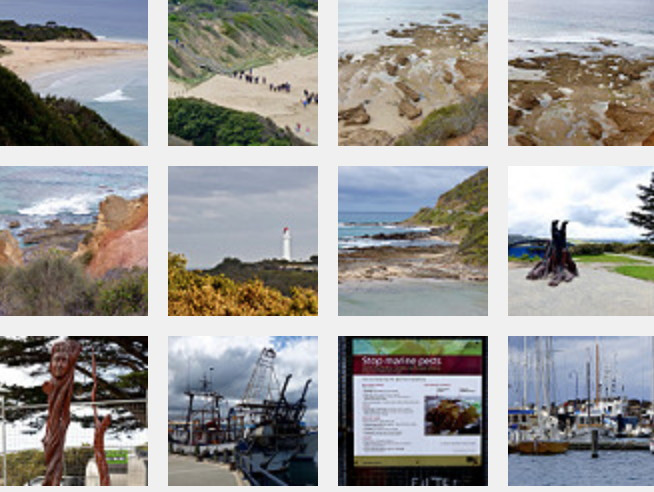 My second Passport was issued on Oct 19, 1971.
The stamps for the first trip in it were:
Luxembourg - Nov 5, 1971
Paris - date not readable - probably Nov 7
Madrid - Nov 23 ..exit
This was a trip with (the late) Arthur Stern and Susan B.
Arthur was an architect and had carefully chosen the places we went to patly by looking at picture books - a habit I have followed. We flew Icelandic airlines via Iceland to Luxemberg - stayed a couple of days. Then we went by train to Paris. I remember an encounter with the train conductor (who we first mistook for an immigration official) who fussed because we had the wrong tickets. There were two routes to Paris and our tickets were for the other one. After a few days in Paris we took the train to Aurillac and rented a car to drive to Conques. (And that was delayed a day because we arrived on Armistice day and the car rental place was closed). Conques is a lovely hillside village in the Midi-Pyrénées region; this was my first trip there - I've been three more times.

After Conques we returned to Auriac and went by train to Barcelona. After a few days in Barcelona we rented a car and went Cuenca and Toledo and then to the Madrid airport to go back home.

In October 1972 I used the passport again for a similar trip. This was with Carol and Ruth K. We started in Amsterdam, went to Paris, then Conques, then Barcelona, and then via London to return home.

In September/October 1973 it was a trip to the Greek Islands. Athens first, then Paros, Ios, and Santorini. This was a trip I went on my own. But I stayed in hostel equivalents and and hung around and socialized with other people - who were from many places in the world. On the day I was supposed to leave Santorini there was a storm and the ferry didn't run. I ended up staying an extra week (those days the bargain airfares were 14-21 days) and missing one day would have caused me to miss a rehearsal so I stayed another week - more Santorini and Ios.

The next stamp (August 1974) was for Saint Pierre et Miquelon. These are a pair of islands off the coast of Newfoundland that are actually a department of France. This was the first trip that Robert

rsc and I took. We flew to North Sydney, Nova Scotia and took the overnight ferry to Port aux Basques. Several days later we took a boat to Grand Bruit (great noise because of the waterful in town), a tiny town that is now officially closed. It could only be reached by boat. After that we continued along the coast and included was a several day trip to St Pierre and Miquelon.

The final trip in this passport was our 1976 trip to Yugoslavia - Croatia now - Zagreb, Split, Hvar, Korcula, Mostar, and Dubrovnic. It ended with a ferry from Dubrovnik to Bari in Italy and then by train to Venice.
Collapse