We returned late Sunday night from a delightful trip to Mérida, a large city in the Yucatan.

The motivation for the trip was that a friend of ours from the Contra Dance world, Brooks Hart, who had moved there a few years decided to start a Contra Dance series a bunch of months ago. In January there is the annual Mérida Fest that commemorates the establishment of the city (this is the 474th anniversary). It goes on for several weeks with lots of events (free). Brooks decide to have some contra dances during the week and one of them was an official event. He got Linda Leslie (a local caller that I've danced to many times), and Amy Larkin and Linda Henry - musicians that we've danced to many times to come down. There were 3 dances planned during the week and that was the motivation for us to come down. The dances were lots of fun (called in Spanish) with many beginners and people that have been coming to his regular dances.

Mérida is a very lively city. The main square with the Cathedral on one side, town hall on another, was always full of people and sometimes sections of the surrounding street were blocked off to host dance or other performance events, and temporarily set-up eating establishments. It was always fun to walk around there - our hotel: Dolores Alba was a few blocks away.

It was always fun walking around town - we ate meals in many different restaurants - usually Yucatan style food (I did have a nice pasta dish in the Irish Pub.) There were always lots of people of all ages milling about, lots of sidewalk vendors, occasional musicians, and huge numbers of eating estblishments.

We took several side trips to Mayan ruins: one to Uxmal and Kabah, and an other to Dlzibilchaltun which were quite interesting and each one was quite different. We also took a trip to Celestun - a nature conserve with lots of flamingos and other birds. And we went to several museums with lots of emphasis on Mayan history.

The main temple at Uxmal: 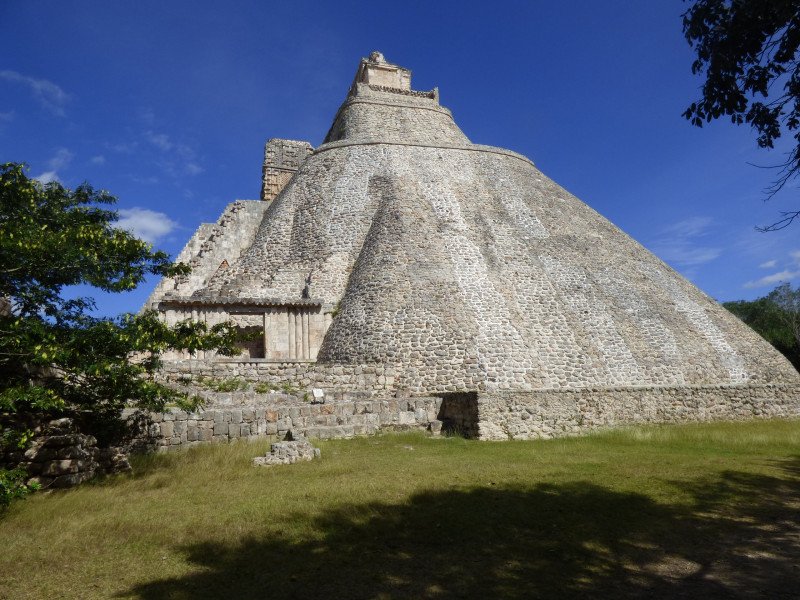