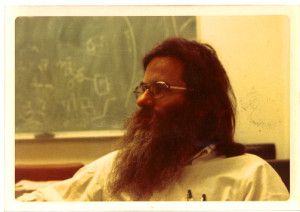 Several of my friends have been anticipating job interviews and wondering what to wear.

Many years ago (late 70's / early '80s) when I looked like this (a picture at work) I was a manager (software development on the Multics project at Honeywell in our Cambridge office) and interviewed lots of applicants.

One person came in and when he saw me (problably in t-shirt and jeans) he told me he had just shaved off his beard and cut his long hair.

Another person (who I already knew because he worked for a customer) wore a suit. He said I hope you won't hold it against me because I wore a suit.

I hired them both.

At one point we were going to have a formal project review with a bunch of senior people from the company. The Program Manager was very concerned about how I would dress. I told her I would wear turkish robes and a turban (which I had just worn at a Halloween party). The next day was the review and I came to work wearing a suit and tie. Just about no-one there had ever seen me wear such clothes.

When our office was closed and my team moved to local headquarters in Billerica - continuing to dress informally. They decided to insitute casual friday. Some of my team wondered if they would had to dress up for casual friday. And I remember some of the managers wondering about what they should wear and said they went out to buy new clothes.
Collapse