Twenty two hours of air travel got us to Bangkok via Chicago and Tokyo. It was uneventful and with ff miles it was first and business class. Intl date line and 12 hours of difference and amazingly enough I didn't feel particularly jet lagged.

Our hotel is on the river edge. Several of the other people on the rest of the trip are also here, and we knew them from prior trips.

On Saturday we went off by Ferry and SkyTrain (elevated metro) to the Chatuchak weekend market, the most colossal market I have ever seen. Many, many, many stalls selling clothes (some would specialize in just one thing like boxer shirts), shoes, plants, doodads of every type, jewelry, food to eat there, hardware, pet supplies (we missed the snakes), housewares, cooking gear, .... It was teeming with people, sometimes you could hardly get through. I'm sure that 1000 stalls is an underestimate. Our hotel is in Banglamphu, an active neighborhood with lots of active streets. It turns out that there was a special anniversary market in late afternoon and evening, so the street was closed and it was full of booths selling everything. We had dinner in one of the restaurants we saw in Lonely Planet and did lots of wandering.

On Sunday the 11 of us who were here for the trip went on an all day excursion. We went to the cemetery of workers who died (mostly of malaria) building the bridge over the river Kwai. Then we went to see the bridge. Then we went to a nearby train station and took a 35 minute ride (with a 1 hir wait for the late train), met our buss and went off to a lunch place. Another drive and went to a spot on the river where we took a longboat upstream and then bamboo rafts back. Nobody got wet. Then we all went for elephant rides. The elephants all stopped for occasional snacks and the one I was riding went down to the river fo a bit I wading and a drink of water. Then a long bus ride home and out onto the street market for some dinner.

rsc and I went to the Grand Palace which is full of ornate buildings, statuary, and other stuff. After that we went to Wat Pho another nearby complex which includes among other things the Reclining Buddha, a 46 meter gold statue that barely fits into its building. a ferry back to the hotel and in a few minutes we are all off to the airport hotel in preparation for tomorrow morning's flight to Cambodia - and then the trip officially starts.

There will be more pictures soon. This one includes a model of Angkor Wat in the Grand Palace grounds which we will see live in a fe days, 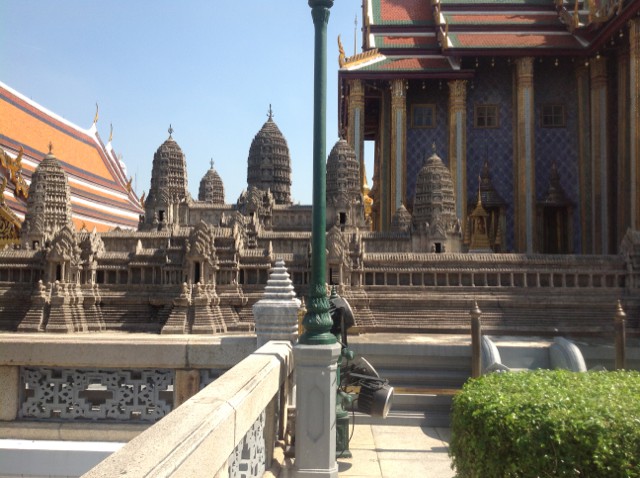 Posted via LiveJournal app for iPad.